It is unlikely that any discovery made about dogs in recent times is quite as important to dog breeders and owners as that of the critical periods in the life of a puppy.  This is revealed through the extensive research of Dr. John Paul Scott at Hamilton Station, Roscoe B Jackson Memorial Laboratory, Bar Harbor, Maine and Clarence Pfaffensburger, Author of "The New Knowledge of Dog Behavior" and father of "Seeing Eye Guide Dog" programs.

At Jackson Laboratory Dr. Scott and his associates studied hundred of puppies as they grew up with their mothers and litter mates and were trained by human attendants.  He has found that the social development of puppies can be divided into definite periods based on the beginning and ending of certain social relationships inherent in all breeds.

When the dog is well trained and has complete self confidence is the time when group instruction is more profitable. 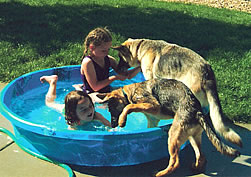 In retrospect, the time is so short: from 21-112 days (thirteen weeks altogether) and once it is gone it can never be retrieved.  It can never be made up at an older age.

Understanding the "Critical Periods" gives the dog breeder, as well as the individual dog buyer, an excellent tool with which to shape the character traits of individual puppies so that they may attain their highest potentials in adaptability to the life they are to lead, and to excel in the kind of work their owner wishes them to excel.

Below is a summary of the critical periods and the socialization needs and development during those times.

Birth to nineteen and a half days avg.  Needs survival, warmth, food, massage and sleep.  Outside stimulus is entirely unprocessed in the immature and underdeveloped brain.  Has no effect or memory if raised by human or dog mother until twentieth day.

Fourth to seventh week.  Environment plays enormous part in development.  Strong socialization with mom and mates develop attitudes towards other dogs.  Serious permanent antisocial effects if taken from mom during this period.  Dominance order develops.  Human socialization is at its peak between five to seven weeks.  Best time to socialize by removing pup from mom and litter mates for five to fifteen minute periods per day at same time each day to encourage individuality and self confidence.  May start some play training in sixth week.

Twelfth to sixteenth week.  Cutting age.  Declares independence.  Best time to establish who is the boss.  Play training ends and discipline training begins.  Needs to be free of distraction at this period during training.   Group training not recommended.  Needs consistent individual time for maximum results.  The breeder should not do their own tests for the best accuracy as the pups are overly outgoing with him/her because they are accustom to them.  Tests should be done by a trained professional who has never been with the litter.  This is the most accurate way to test.

The first critical period is approximately the first twenty days of the puppies life.  It averages about the first nineteen and a half days.  There may be slight variations due to the amount of time the bitch carries her pups, hence some pups may be more mature at birth than others, but with all puppies it is complete by the twenty first day and the break is sharp.  The critical part about the first twenty days is survival, warmth, food, massage and sleep.  The studies have shown that there are absolutely no differences in the adult behavior of dogs who were raised by humans or by their mothers during the first critical period due to the under developed brain.  The brain waves do not vary at all now.

Beginning on the twenty first day the pup enters into the second and most important critical period of its existence.  The pup can see quite well, hear and smell, so from now on, environment plays a tremendous role in the development of the dog.  Suddenly the big world around him has opened up to his attention and he needs his mama very much.  For the next four weeks his brain and nervous system are developing.

During these four weeks puppies socialize with their mother and litter mates and thus form their attachment to other dogs.  This is a very normal thing to do and plays a very important place in the well-rounded development of a dog.  A puppy who does not complete this time period its mother and litter mates is often the same dog that grows up and picks fights with all of the strange dogs he meets.. 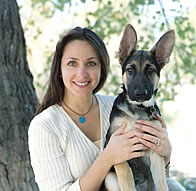 It is also during this four weeks that pups start to play fight.  In some of the breeds, this  can become quite serious fighting, and the order of dominance has begun:  For two reasons - (1) the puppies need for socialization with other dogs, which makes it desirable for the puppy to remain with its mother and litter mates up until it is seven weeks old;  and (2) the fact that a dominance order is developing which can have lasting effect upon the individuals making bullies of some dogs and underdogs of others--  it is believed that the ideal time for the puppy to go to its new owner is at approximately seven weeks of age, which is also the best time for weaning.  These two things are best accomplished at the same time.

It is interesting to note that in the studies completed at Bar Harbor, that it was found that if there were males in the litter, that the largest male was always the most dominant, however if it was an all female litter, that size played no factor in dominance as the pup that was the most vocal was always pack dominant.

Experiments also showed that pups that were taken away from their mother and litter mates at about the end of the fourth week and given a great deal of human attention, became very socialized with humans, often forming such strong attachments to people that they did not care about other dogs at all.  Some even expressed sexual desires toward human beings and were almost impossible to breed.  Interrupting the natural canine socialization process before the seventh week of age causes unnatural results.

The conscientious breeder will incorporate pup socialization with human beings from the fifth to the seventh week of the pup's life.  Taking the pup away from mom and litter mates for as little as five to fifteen minutes a day at the same time each day was found to be the most desirable plan.  The pup then begins it's attachment process to people and the puppy begins to feel the importance of being individual; this also counterbalances its dominance with the litter and it learns to behave well with other dogs.

If all breeders separated their pups at seven weeks from mom and litter mates and continued the individual socialization process until the pup was placed, results would be acceptable, however as you can imagine, this can take a considerable amount of time and commitment on the part of the breeder and the pup would develop its strongest loyalties in the bonding period  (seventh week) to the breeder and not with his life long companion when he is placed.  The pup has absolutely no further developmental need for his mother or his litter mates after the seventh week.  Placement in the seventh week is far more optimal for both owner and pup in the bonding process and does not stand to debate in light of the research done by Dr. Scott and his associates.

During the third critical period-- from the seventh to the twelfth week, training can occur daily, however research shows us that dogs do very well on only fifteen minutes at a time at this age span.  This period is also when the dog will form his views of people that he will hold for a lifetime.  He will also establish his attitudes on the acceptance of direction and education.  It is paramount and essential that the pups spends a considerable amount of time with individual attention to establish its self importance inherits is still strong, however it is at this time that is may be cultivated by teaching it to work together with it's master for the mutual benefit of both.  Never again will the human partner be able to bind the puppy to him, or shape his character traits to follow the pattern which he wishes him to follow, as he can during the second and third critical period.

From twelve to sixteen weeks is the fourth critical period in socialization.  This is the cutting age.  The pup will declare its independence fully at this time and this is the best time for man and dog to decide who will be the boss.  Serious training can and should be started now.  This is the best time to transition from play-training to disciplined behavior.